October is a spooky season and Ms. Kylie Jenner kills it every single year! Everyone must see Kylie Jenner’s promo video for her new 2021 Halloween Kylie Cosmetic collection! She is known for doing incredible visuals that are great for marketing her brand! Jenner had a Freddy Krueger-inspired visual, which saw her sensually rub the red liquid all over her skin. Check out the video here!

Even though she is currently pregnant, she is still putting in the work. Just last month she also released Kylie Baby which was a hit for all the mothers out there, but this 2021 Halloween campaign takes the cake!

The Kylie X Nightmare On Elm Street collection will have a VHS theme. The packaging is shaped just like a video tape. Some of the colours from the eyeshadow palette are named ‘He’s coming,’ ‘Stay Up Late,’ and ‘Elm Street’ – with red being a core colour throughout. Each of the eyeshadow shades are in deep hues, which are all beyond perfect for spooky season. 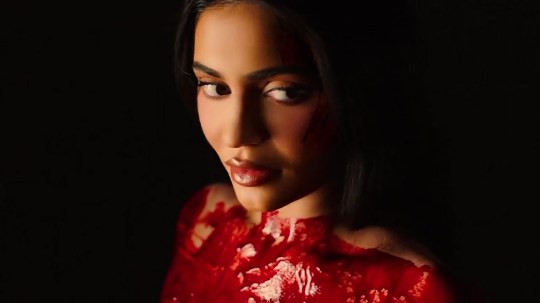 Kylie Jenner’s new  A Nightmare on Elm Street 🔪🩸is fully releasing on October 12 just in time for Halloween!

Beauty Trends Bound to Be Big in 2022

There’s no denying that skincare is as popular as ever. Everywhere you look, you’ll find…
END_OF_DOCUMENT_TOKEN_TO_BE_REPLACED
3103
29
Share
Beauty & Skin Care

5 Skincare Products to Protect You From Spring Allergies

Spring is here but so are seasonal allergies. Pollen, mold, and other common allergens tend to rise…
END_OF_DOCUMENT_TOKEN_TO_BE_REPLACED
1211
32
Share