In what turned out to be one of the most ridiculous moments on live television, many people who were on the fence about watching the 2022 Oscars were happy they tuned in! Best Actor Winner Will Smith now ‘famously’ slapped comedian Chris Rock in the face for referring to his wife, Jada Pinkett Smith, jokingly as GI Jane 2 ( Pinkett- Smith actually has alopecia, which causes her to lose hair).  Next thing the audience sees: Smith walking at least 50 feet up to the stage, slapping a stunned Rock who keeps his composure, then turns and walks away, with a look of great satisfaction on his face.

One thing is certain, Chris Rock deserved an Oscar for that stoic performance post smack! He yells back at Smith, “Really?? Over a GI Jane Joke?” To which Smith screams, ‘ KEEP MY WIFE’S NAME OUT OF YOUR F*CKING MOUTH’… twice.  Actors like Nicole Kidman and Lupita Nyong’o looked absolutely stunned; viewers at home were very confused thinking the whole ordeal was staged. Those watching on Hulu- immediately after the slap, thought their TVs are broken as it cut out and went silent! However Twitter video forensics proved  that it was in fact, real. 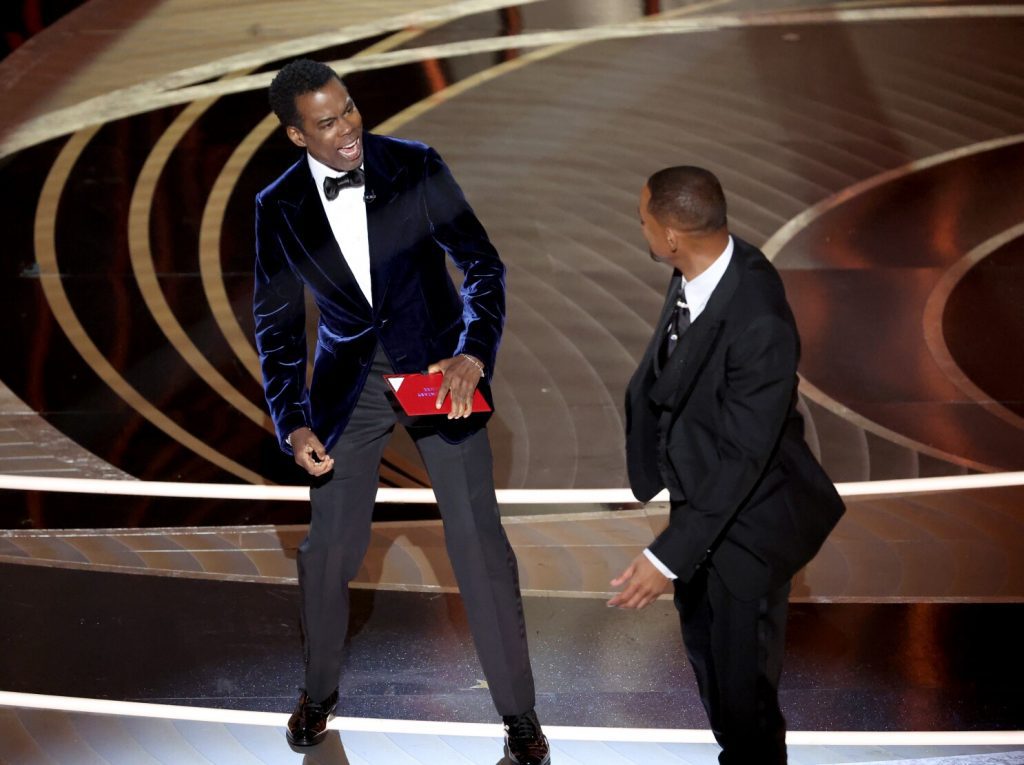 This is where many questions come up. Will Smith expected everyone to know Jada has alopecia? We never heard them publicly speak on this, or help with this cause (If they have, it’s just not as searchable as their open marriage, unfortunately ). Jada and Will have put their personal life on BLAST FOR YEARS – even writing a tell all book! This is what sets him off? How do schools have better security than the Oscars? It is hard to believe no one stopped him. It took him at least 40 seconds to 1 minute to walk up there, right? Many people were wondering why he was not ushered out. It was moments before the Best Actor Award was announced, and The Academy was truly put in an awkward situation.

Will was apologetic to the academy and his peers during his best actor speech, and even appeared to have somewhat of an emotional breakdown. Post assault, actors like Bradley Cooper and Denzel Washington rushed to his side to comfort him. Many people are now wondering- will the Academy ask him to hand back his Oscar? They have strict guidelines in its code of conduct. The Academy reestablished its Code of Conduct in 2017 during the “Me Too” & “Oscars So White” movement.  They did take to their twitter page and say:

“The Academy does not condone violence of any form. Tonight we are delighted to celebrate our 94th Academy Awards winners, who deserve this moment of recognition from their peers and movie lovers from around the world.”

They could have done better- Surely things will unfold over the next week. Page Six reported that Rock declined to file a police report, so Smith will not be in any kind of legal trouble. Overall, Chris Rock was a class act and behaved like the better man in this situation.

More about the what happened

What Happened at the 94th Academy Awards?

Need a good laugh AND a good cry? Then head to “Birthday Candles” on Broadway, new play by Noah…
END_OF_DOCUMENT_TOKEN_TO_BE_REPLACED
126
0
Share
CelebrityReality TV

Lala Kent of Bravo’s ‘Vanderpump Rules,’ shows no signs of slowing down! The…
END_OF_DOCUMENT_TOKEN_TO_BE_REPLACED
134
0
Share
CelebrityNews