Jefferson White, who plays Jimmy on the number 1 show ‘Yellowstone’ says don’t write him out of Season 5 yet! Jefferson chatted with Lauren Conlin on the Lauren Interviews podcast  about the show’s future, and the new ‘Yellowstone’ podcast that he’s hosting. Warning- spoilers ahead!

In the season 4 finale, Jimmy Hurdstrom heads back to Texas with his fiancé Emily. Like many others, I sadly assumed that to be the end of Jimmy but Jefferson White says hold it right there.

“Well, listen, don’t don’t uh, don’t kill me too soon, I’m still hoping I have my job. So we’re using the power of positive thinking and we’re manifesting in continuing to have a job. So just, uh, I’d love it if you’d put that energy out there…’ Jefferson tells Lauren.

When asked how he’s enjoying being the host of the new Yellowstone Podcast (available everywhere now), White replies that he is.
“I am.  As an actor, you know, a production schedule is brutal. You’re working crazy long days. You’re always just sort of scrambling to keep up, especially me cuz I’m a, I’m a moron. So I’m sort of always a little bit behind- always treading water just to try to survive. And so the chance to sit down and have a long, you know, protracted conversation about the process with these other actors, for me has been a huge gift, you know, especially just cause these are all people who I’ve been learning from for years now. I’ve been learning from watching Kelly Riley who plays Beth. Yeah. Watching Cole Houser who plays Rip, Luke Grimes and Wes Bentley. And so the chance to talk to them and sort of put some of that learning on paper basically has, has been a real, real gift for me as somebody who, you know, has so much to learn still. “ 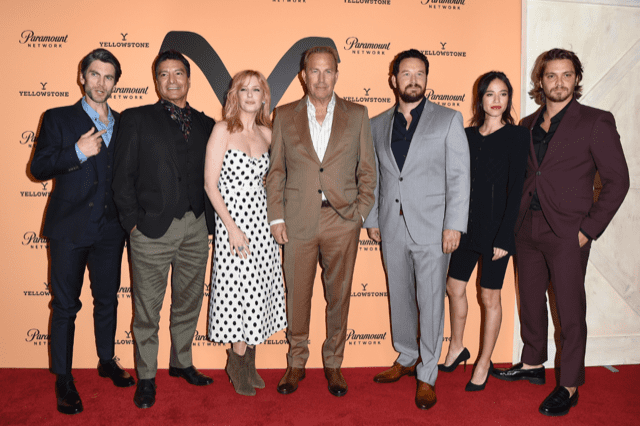 The cast of Yellowstone (Image: GETTY)

Being a huge fan of the show, we can’t wait to listen. Additionally, something that really surprised us was that Jefferson had never ridden a horse before shooting Yellowstone and he was even afraid of them.
“I had never ridden a horse,” he tells Conlin. ” Before I had ever ridden, I was kind of afraid of them. I sort of assumed that they had malicious intent, you know, I sort of assumed that they felt, you know, like, like oppositional. Like these horses (on Yellowstone) are smarter than I am guaranteed. It’s like, they’re really like, I’ll tell them to turn left and they’ll be like, no, bro, we’re going right. Come on. What are you doing? They take incredibly good care of us.”
All 4 seasons of Yellowstone are now streaming on Paramount- we highly suggest catching up if you haven’t already.

An epic drama about the Dutton family, who controls the largest contiguous ranch in the U.S., which is under constant encroachment by those it borders. It is an intense study of a world far from media scrutiny—where land grabs make developers billions, and politicians are bought and sold by the world’s largest oil and lumber corporations. (From TV Guide)
Share
Jefferson White Luke Grimes Yellow Cab Yellowstone
0
Share