What’s up With Celebrities Buying NFT’s?

Would you pay $150,000 for an NFT of an ape? That’s the worth of a Bored Ape Yacht Club NFT owned by Lil Baby. Similarly, Tampa Bay Buccaneers quarterback Tom Brady co-founded an NFT platform called Autograph. But what exactly is an NFT and why is there so much hype surrounding them?

The term NFT stands for non-fungible token and it’s a form of digital art that can be purchased with Ethereum, a cryptocurrency similar to Bitcoin, and can be exchanged for other NFT’s. The first NFT ever created was titled ‘Quantum’ and it was produced on May 2, 2014, by Kevin McCoy. Depending on what the NFT is or who made it, the value will fluctuate in price. One example of  NFT’s being valued high is when artist Beeple (Mike Winkelmann) had a collection of 5,000 NFT’s bid for over $69 million in March 2021.  The collection featured various pop culture images and figures that were formed to look like a television tuning into CNN.

Given the opportunity to make loads of money off NFT’s, it starts to make sense why celebrities would invest in this form of digital art. On Nov 29, rapper Snoop Dogg debuted a new series of NFT’s featuring drawings of Snoop throughout his career in collaboration with the artist Coldie. Initially, the value of the  NFT’s was set at around 169 ether or $750,000.

There is however a darker side to celebrities getting involved in the NFT business. Back in November, Miramax Studios sued director Quinten Tarantino after he planned on selling early screenplay drafts from the 1994 movie “Pulp Fiction” as NFT’s.  Tarantino also planned on releasing personalized audio content with certain NFT’s, an impossible concept given how an NFT cannot produce any sound. 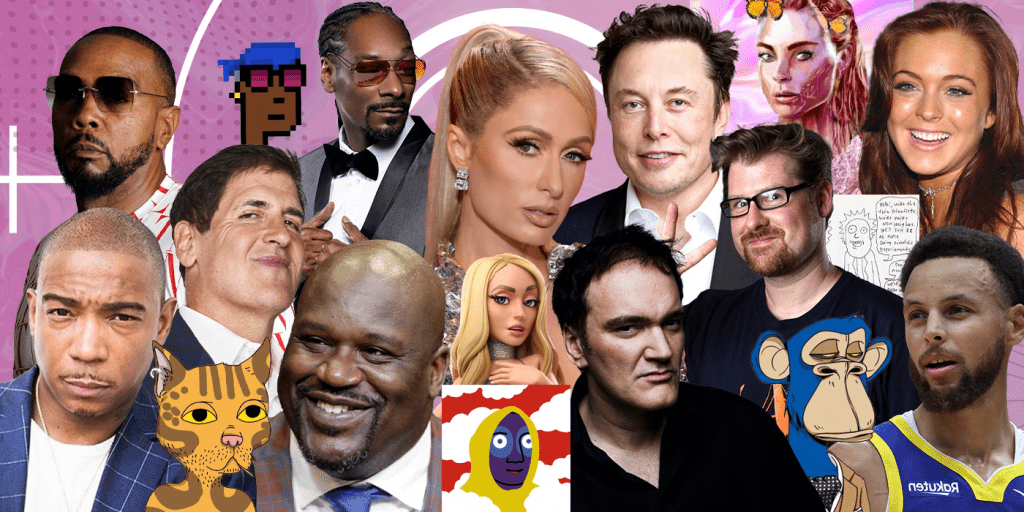 Besides possible lawsuits, celebrities also risk losing money when selling an NFT. Take the pop singer Grimes as an example. In February, Grimes issued over 300 NFT’s worth around $7,500 each. By November, a Grimes unit sold for a meager $1,200.

Another important factor that celebrities should consider when investing in NFT’s is the impact they have on the environment. According to Brightly, the energy consumption behind selling NFT’s is similar to the daily carbon footprint of Bitcoin mining which produces 38 million tons of CO2 a year.

On March 26, pop band Gorillaz was criticized for announcing that they were selling an NFT commemorating the 20th anniversary of their first album. The backlash stood from the hypocrisy of the band’s previous environmental activism on albums like 2010’s ‘Plastic Beach’.

So what does the future hold for celebrities and NFT’s? According to Domus, the value of the NFT market has skyrocketed from $340 million in 2020 to $14 billion in 2021. Earlier this year, the band Kings of Leon made NFT’s based on their album “When You See Yourself” which raised almost $2 million. Will other artists do similar stunts to raise money for their projects?

Outside of NFT’s, celebrities are also getting involved in the cryptocurrency market. Soccer star Lionel Messi is a global ambassador for blockchain developer Sirin Labs while boxing legend Mike Tyson has partnered with Bitcoin Direct, a cryptocurrency platform.

If you’re interested in finding out how technology is changing the music industry, check out our exclusive interview with Mark Walton and Red One  about their platform, SpotStar.