Atlantis, The Palm And Moët & Chandon Raise A Toast To 2022, Achieving The Guinness World Records™ Title For The World’s Largest Drinking Glass Pyramid

Under the magnificence of the resort’s Asateer Tent, 120 VIPs donning glamorous gowns and dapper suits raised a glass to 2022 as they bore witness to the unveiling of the world’s largest drinking glass pyramid. Officially verified on the night by Guinness World Records™, guests watched in awe as 54,740 glass coupes towering over 8.23 meters high were filled from a luminescent jeroboam of Moët & Chandon. Beating the previous Guinness World Records™ title of 50,116 glasses set in Madrid in 2017, a team of six from Dutch company Luuk Broos Events spent five days and over 55 man-hours meticulously stacking the glittering tower of coupes ahead of the grand unveiling.

Series of sparkling soirées set to pop up in over 20 cities, including London, Hong Kong, Toronto, Madrid, Moscow, Johannesburg, and Mexico City throughout 2021/22. With many UAE celebrities, media and VIPs in attendance, guests were invited to sip champagne on the sandy shores of Dubai’s leading beach club, WHITE Beach, before embarking on an immersive experience featuring musical performances and elegant entertainment.

As guests moved into the resort’s majestic Asateer tent, ballerinas draped in glitter and gold twirled around the 8.23-meter-high tower of coupes as Guinness World Records™ oversaw the ceremonious pouring before announcing the record. 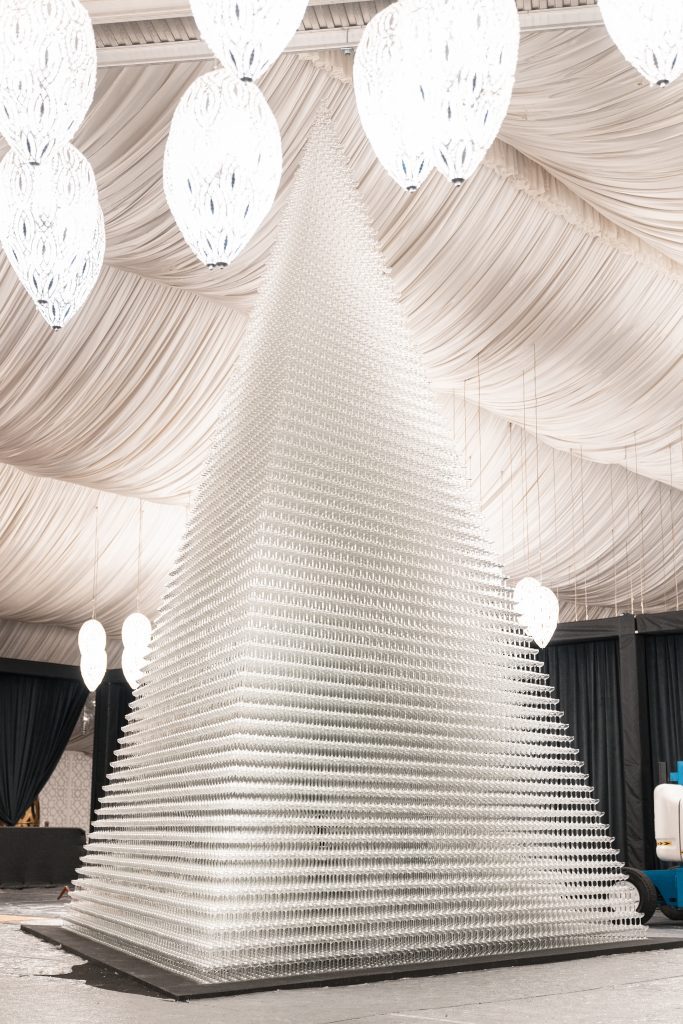 “Following what has been a challenging year for us all, it’s a pleasure to stand here today toasting to the dawn of 2022. Tonight, we join our valued partner and fellow masters of celebration, Moët & Chandon, in creating a moment in history, born from our mutual vision of celebrating togetherness. The champagne tower is traditionally a beacon of greatness and generosity, and we’d like to toast to a new year filled with both in abundance”.

While Moët & Chandon did not invent the champagne pyramid, it’s a symbol that the brand has appropriated since the late 1950s with the house perfecting the art of creating ever-taller champagne pyramids, breaking records in the process.  Laurent Dominguez, General Manager, Moët Hennessy Middle-East, said: “A symbol of celebration and generosity, Champagne Pyramids are deeply-rooted in Maison history and DNA. In 1983, to mark its 240th anniversary, Moët & Chandon established the first world record for the highest champagne pyramid with 2,757 crystal glasses. Almost 40 years later and alongside our valued partner and iconic destination resort, Atlantis, The Palm, we are thrilled to perpetuate this heritage and create a new milestone with this daring attempt.”

“Huge congratulations to all those involved for achieving the largest drinking glass pyramid. It takes some considerable planning and organization to pull off a feat of this magnitude. The strict guidelines provided by Guinness World Records™ has been observed to the letter, and it was a pleasure to witness such a dedicated team at work. Congratulations, you are Officially Amazing™.” 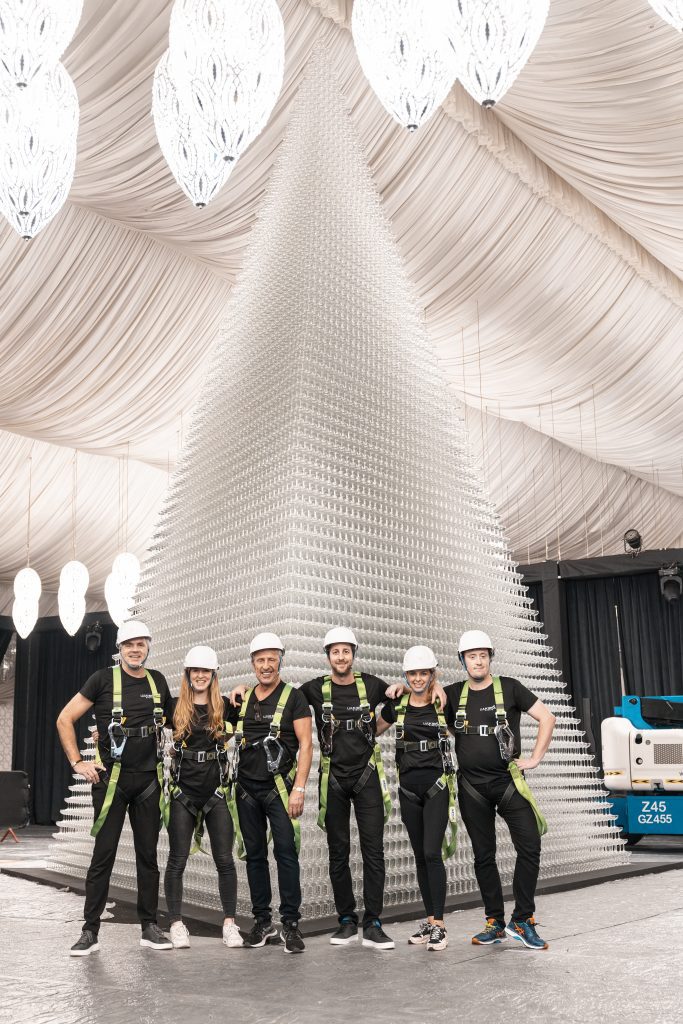 “It has been a pleasure working with such a driven and enthusiastic team and we are so pleased that as the five-time record holders, we have managed to break yet another Guinness World Record™ for Moët & Chandon and Atlantis, The Palm. What a great start to 2022! Building a tower of this size is no small undertaking and over half of our team are actually made up of surgeons due to the level of discipline, focus and a steady hand that it requires….especially for the last few meters”

Following the grand unveiling, the glass tower will remain in place until 1st January at the resort’s annual New Year’s Eve Gala Dinner, featuring a guest performance by international singer Robbie Williams. Following this, in support of Atlantis, The Palm’s sustainability initiative, The Atlantis Atlas Project, all 54,740 coupe glasses will then be recycled by a local glassblower and transformed into refillable glassware for Atlantis, The Palm’s 1,548 rooms and suites.

Founded in 1743, Moët & Chandon is the Maison that contributed to introducing champagne to the world by offering a range of unique wines for every occasion. From the iconic Moët Impérial to the Grand Vintage Collection, from the extroverted Moët & Chandon Rosé Impérial to the innovative Moët & Chandon Ice Impérial, each champagne dazzles and delights with bright fruitiness, an enticing palate and an elegant maturity.

About Atlantis, The Palm, Dubai

Located at the centre of the crescent of The Palm in Dubai, Atlantis, The Palm is the first entertainment resort destination in the region. Opened in September 2008, the unique ocean-themed resort features a variety of marine and entertainment attractions, as well as 22 hectares of waterpark amusement at Atlantis Aquaventure, all within a 46-hectare site. It is home to one of the biggest waterparks in the world and one of the largest open-air marine habitats, with more than 65,000 marine animals in lagoons and displays, including The Lost Chambers Aquarium, a maze of underwater corridors and passageways providing a journey through ancient Atlantis. Aquaventure Waterpark features 23.5 million litres of fresh water used to power 105 thrilling waterslides and attractions, including several world record-breaking slides and two river rides featuring tidal waves and pools, water rapids and white-water chargers. Dolphin Bay, the unparalleled dolphin conservation and education habitat, and Sea Lion Point were created to provide guests with a once in a lifetime opportunity to learn more about some of nature’s most friendly mammals. The resort boasts an impressive collection of luxury boutiques and shops as well as extensive meeting and convention facilities. Atlantis, The Palm is also known as the culinary destination in the region where guests can take their pick from a collection of 35 world-renowned restaurants, including Bread Street Kitchen & Bar, Hakkasan, Nobu, Ronda Locatelli, Seafire Steakhouse & Bar and the award-winning underwater restaurant, Ossiano. Atlantis is also home to a buzzing nightlife scene with entertainment destination Wavehouse offering something for everyone, while WHITE Beach & Restaurant is the perfect place to unwind with a drink as the sun slips into the Arabian Sea

This year’s Golden Globe Awards were unlike any other year. Besides not having any audience…
END_OF_DOCUMENT_TOKEN_TO_BE_REPLACED
0
0
Share
EventsHolidays

Dundas x REVOLVE celebrated the release of a new holiday collection, which launched on REVOLVE the…
END_OF_DOCUMENT_TOKEN_TO_BE_REPLACED
2
0
Share