This weekend Pop Style TV headed out to the Hamptons to a castle to party! Former banker turned musician, Sir Ivan is known for his legendary parties. Last party was no disappointment either . As we sipped on our cocktails we all anxiously  awaited the official release of his new song , the anti -bullying anthem ” Kiss All The Bullies Goodbye” featuring Taylor Dayne and produced by Paul Oakenfold. In addition evening featured a 5-hour set from Vienna’s Life Ball Resident DJ Sin Morera and non-stop dancing from 28 professional dancers from Stepping Out Studios.  The performance started off with Sir Ivan being chauffered into the castle on the back of a motorcycle. He then hit the stage in a leather biker cape embellished with Swarovski crystal piece sign as he proceeded to put on an electrifying, fun show.

Meanwhile a series of eye popping costumes kept the crowd entertained all night. Theme of this year’s party was Village People so lets just say there was lots of scantily clad little Indians running around with cops if you know what we mean. We waited for the naked pool jumps but that didn’t happen. Something has to be saved for next year. 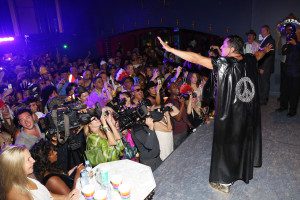 The night was also a celebration of the supporters of Sir Ivan’s charity The Peaceman Foundation that donated over $200.000 in the battle against bullying. We had a blast and Sir Ivan sure knows how to throw a party!

Check out his latest song http://sirivan.com

To the Rescue! Gala supporting the work of the Humane Society of the United States and Humane…
END_OF_DOCUMENT_TOKEN_TO_BE_REPLACED
47
0
Share
Award ShowsEvents