On a hot summer day on Mulberry, the street is closed to cars. Turning from Broome Street, the atmosphere is quiet and open; walking in the middle of the street with gelato in hand is encouraged. Somewhere closer to the next block up, the sultry voice of the Countess Mascara hits the eardrums. 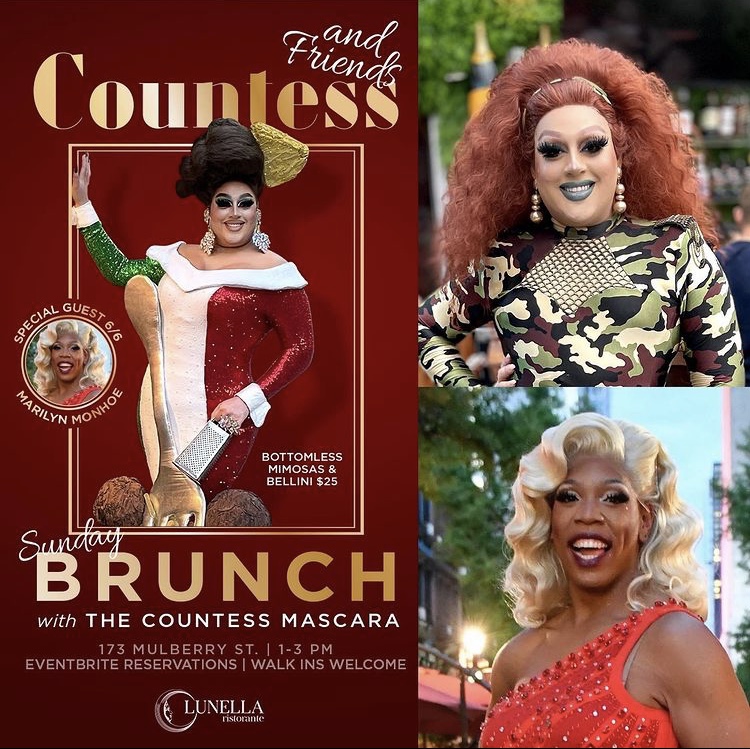 With a purple beverage, dubbed “the Countess” in her honor, clutched elegantly to her silicone breast, she commands the crowd sitting before her at Lunella Ristorante. “Grab a drink, grab some food. Get your life girl,” she says.

The Countess Mascara introduces her guest for the day. Marilyn Monhoe saunters in wearing a red blazer dress with metallic threaded embellishments all over and a purple wig with pink highlights—unlike her usual blonde—just one of three costumes she dons throughout the show.

Leaning on a customer’s back, she introduces herself further. “Marilyn Monhoe is a hoe. And single,” she says. Later on, it becomes a game to drink every time Monhoe mentions her relationship status.

The Countess and Monhoe have two very distinct styles.

Countess is heavily inspired by sketch comedy as part of her performance. She says that her first inspirations came from SNL and that Bobby Moynihan’s Snooki heavily influenced her own Snooki set in her first drag performance.

Monhoe’s looks and performances are heavily influenced by Broadway. Many of her costumes are originals from Broadway shows or exact replicas.

It’s worth noting the plain rules of watching drag. The Countess and Marilyn explained the ABC’s.

A is for applause. “When you see something so fucking amazing, applaud,” says Monhoe. B is for booze (for obvious reasons). And C is for cash.

Throughout each performance, customers hold up money for every moment they think-is-fucking-amazing, and the queens expertly grab their tips, incorporating the randomness of it into their moves.

After warming up the crowd of gay men, theatre kids, hungover twenty-somethings, and others who had no idea a drag show would happen in the middle of their lunch, the Countess performs her first routine.

“Don’t Cry For Me Argentina.” With her bouncy, copper-toned wig, big lashes, and polka-dot pin-up style one-piece all in perfect position, hands full of ones and fives promptly raise high in the air for the Countess.

Her next performance is a mashup. “Do we have any climate deniers in here today?” asks Mascara. At first confused, the crowd roars with laughter when she lip syncs to a polar bear documentary mixed with “Let it Go.”

“Is there a straight man that could help? Didn’t think so,” she says.

She starts with “It’s All Coming Back to Me Now,” then a quick change into a red, sparkling flame applique dress, in which she performs “Burn Baby Burn.” Lighting up the restaurant with each touch and grab of a customer’s shoulder, she receives many applause and crisp dollar bills.

“I’m having a real good time,” Monhoe says, a bit out of breath, before excusing herself to change into her third look: a rainbow, one sleeve leotard. This time, she came back with a new, auburn wig on, too. A few drinks and a couple of show tunes later, the performers break for intermission.

Rossanna Russo started this drag brunch five years ago at her family restaurant, Lunella Ristorante, with the help of her best friends, both of which are gay. “Pride needed to debut in Little Italy,” Russo says. She says that Little Italy was lacking an LGBTQ+ safe space in the neighborhood. Her drag brunch, Countess and Friends, serves as a hotspot for an end of weekend hoorah. The Russo’s bought the restaurant in 2001, a month before 9/11. Named after her mother, Lunella Ristorante’s will turn 20 this August. Russo took over for her parents, both Italian immigrants, when their health started to decline a few years ago and since their passings, she carries on the legacy proudly.

Lunella Ristorante stands out on Sunday afternoons among the competition. “A lot of the other people in the neighborhood aren’t as hip and cool as I am,” Russo says, giggling.

Has hosted the brunch since its revival in March, after the pandemic had halted the event for about a year. (The restaurant did, however, still host Pride Online events for their regulars.) Russo says she saw the Countess walking down the street one day in a spaghetti skirt and knew they needed to work together. Fifteen minutes later, everyone is seated. Countess and Monhoe come out readier than ever. Countess performs “This is Me” from the Greatest Showman. For this one, she goes all out. Grabbing the Pride flag from the restaurant’s facade, she parades down Mulberry perfectly lip syncing to the music, each step of her platform stilettos emphasizing every word.

“And I’m marching on to the beat I drum, I’m not scared to be seen,” she mouths confidently, sparkling in the 85 degree weather and direct sunlight.

After a Game of Drag Suicide

In which a random song plays and the queens have to lip sync to it whether they know the lyrics or not—they perform their last few. One of the final standout performances is Monhoe’s “Suds in the Bucket.” The crowd goes wild for Monhoe’s ability to turn a restaurant into a stage, lip syncing to a country song and making it all her own through theatrical techniques—like fake crying into a silicone boob, falling, and using the customers as props to lean on.

At around 3:45, the Countess Mascara calls the event to a close. The bottoms of mimosas were reached and the crowd dissipated onto the narrow street. The queens go back to their dressing room to pack up. In the back, Rossanna, beaming from the success of the show, asks them to order anything they’d like. Marcelle LaBrecque, who plays Marilyn, orders another bellini; Mike Mascari, who plays the Countess, continues to sip on his namesake drink.

“‘Suds in the Bucket’ was your best,” says Russo to LaBrecque, complimenting their entire performance, top to bottom. Graciously and giggling, she gives them a big hug before grabbing more refreshments. Tomorrow morning, Marcelle will likely be at their nannying job. One day, they hope to be cast on Broadway, ideally in Kinky Boots. Mike will likely be at his side job tomorrow, too: event planning. “Performing is always the goal,” Mascari says.

Passionate about fashion and all things fun and trendy!

7 NYC Coffee Shops You Should Try

In NYC, there are plenty of coffee shops to explore. Whoever lives in the city has their favorite…
END_OF_DOCUMENT_TOKEN_TO_BE_REPLACED
303
0
Share

Celebrities Who Have Come Out in 2021