Rihanna and A$AP Rocky announced that they are pregnant, and if you expected to see some amazing maternity looks you were not wrong!  We’ve gathered 11 looks Ri Ri with a baby bump has given us so far starting with the clever cover-ups which had us fooled us in the first place! Scroll to See!

Baby bump? As Barbados had a ceremony to celebrate their new status as an independent republic last year, and she was named a national hero Rihanna wore an orange maxi dress by Bottega Veneta. Fans were extremely suspicious since she was covering her belly. Barbados orange dress started the pregnancy rumors.

Oversize everything! It is now clear that it was more than a style statement but rather to keep us out of her business.  She wore matching grey sweatsuit, blue jacket and cool white sunnies

Very chic look for this couple, Rihanna in an oversized Balenciaga X Gucci puffer! Again, we now realize that “oversized” was her cover up

All black is always sexy and cool and RiRi looks amazing! What makes it even cooler, all leather.

Rihanna is never ever super low-key; she pushes boundaries, thats what makes her a fashion icon. Still concealing  her pregnancy, she looks fab in the Miu Miu outfit and a bright red jacket.

Bright orange coat and camo print pants gives us RiRi vibes from the beginning of her career.

Days before the couple announced that they were expecting, Rihanna paired an oversized jacket with a faux-fur lined miniskirt, and a faux-fur stole over her shoulder. what a unique look and pieces, not so traditionally paired. 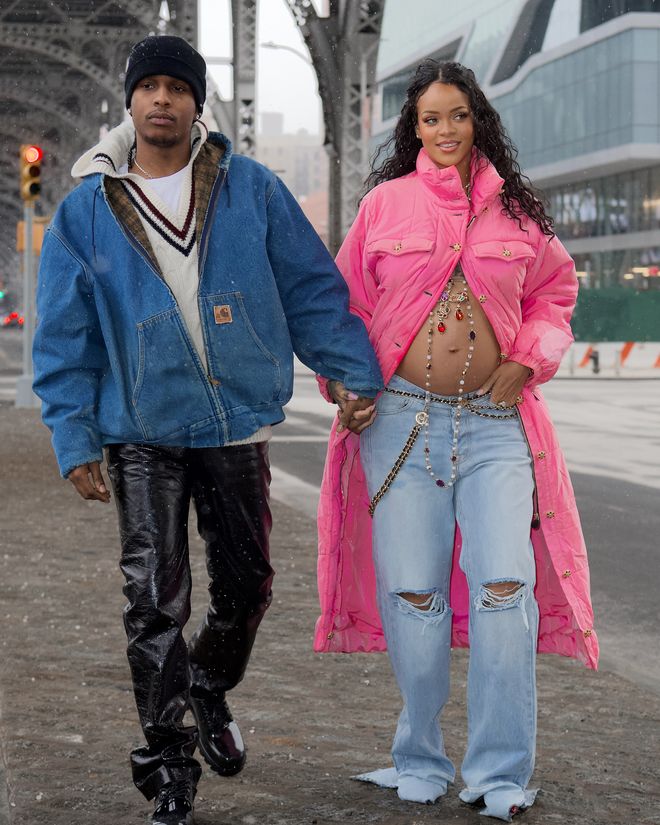 Image From The Cut

Rihanna heard desperate pleas for her to drop the album and instead decided to drop a pregnancy announcement! Yes, Robyn Rihanna Fenty chose a very chic look to confirm her pregnancy.

It does seem like she was excited to show off her baby bump.  This black lace-up top and black leggings really re-invented how women dress during pregnancy.

This look is another one of her major looks while pregnant. Such a Y2K throw back, as well as giving mothers around the world the confidence to style their baby bumps.

Rihanna aced pregnancy style yet again at a Fenty Beauty event. Here she wears a shimmering ensemble made up of green and purple sequin strands and looks fantastic.

Rihanna wore a red leather dress-coat by Alaia with matching red eyeliner and strappy sandals. This is a very high fashion look. We predict it will be copied and remembered for years to come.

To meet the increasing need for diversity in fashion, clothing comes in all colors of the rainbow…
END_OF_DOCUMENT_TOKEN_TO_BE_REPLACED
39
0
Share
Fashion

As we get ready to travel over the holiday season, many of us will be going through airports with…
END_OF_DOCUMENT_TOKEN_TO_BE_REPLACED
57
0
Share
Fashion