Beauty Trends Bound to Be Big in 2022

On the heels (pun intended) of Paris’ Spring/Summer Fashion Week for Beauty Trends in 2022 (SSFW22), the trends for the upcoming year seem to be quite a mixed bag. With designers like Versace, Balmain, and Alexander McQueen showcasing new looks, it seems that the direction fashion is taking will be a fusion of nostalgic pieces and the boldness of the 21st century.

These houses have dictated many of the fashion trends for decades and they’ve successfully incorporated pop culture into haute couture. Their designs trickle down into the market by brands recreating their looks in more toned-down versions, ready for everyday wear. The makeup seen on the runway will most likely also translate into daily life through more casual looks while keeping its essence intact. So, here are some of the runway-inspired beauty looks that will rock 2022:

This is a bold look that was seen on many models throughout SSFW22. It is a method of putting eyeliner with either bright colors or bold designs (or both!). Though this method of wearing makeup has been around for a while, it was put into mainstream media by Euphoria, a television show known for its experimental looks. The show is so influential in the beauty scene that Hunter Schafer, one of its breakout stars, was named the new face of Shiseido. Graphic liner is making its rounds in the fashion industry and will definitely find its way to become a 2022 beauty trend. You can use liquid liners or layer on powder shadows and get creative. There are no rules except for breaking the norms with this trend. 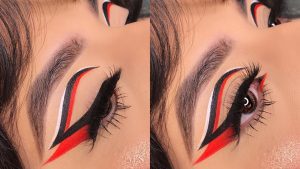 Bedazzled eyes were huge makeup looks in the early 2000s, and they’re experiencing a resurgence. This involves putting jewels on and around your eyes, though some people even take it a step further by putting it on their cheekbones. It’s a great and simple way to put emphasis on your makeup while also making a more fashion-forward look. To get this look to really pop, lush eyelashes will make a bolder appearance. This can be achieved with falsies. Or, you can try a lash serum that promotes growth and strength. One with a good formula, including keratin and biotin, will make your eyelashes darker and make your eyes stand out. Though bedazzled eyes aren’t much of a daily look, it’s a fun new trend that can spice up your beauty game. 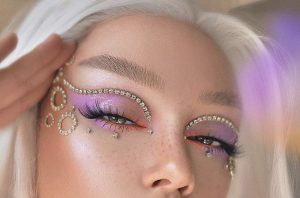 It seems like the days of natural looks are numbered as many designers opted to have their models sport more daring looks. With that, the statement lip seems to be making a comeback—but with a twist. These looks were popular in the early to mid-2010s with lipsticks in shades of dark browns, reds, and purples. Though it is back with its past iteration, some trendsetters have taken it to newer heights, creating makeup looks with metallic blue lippies. The gradient lip, popularized by East Asian media, is also one that is coming back into vogue. In 2022, it is expected that the statement lip will come back and make its way into everyone’s daily looks. 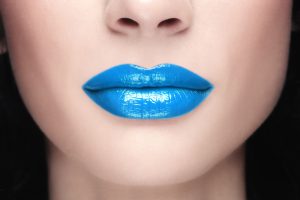 With new Beauty Trends in 2022, staying up to date on all of them will ensure that you will always look fresh and in style.

While it’s definitely not crucial to use astrology as inspiration or your manicure, it can add…
END_OF_DOCUMENT_TOKEN_TO_BE_REPLACED
116
0
Share
Beauty & Skin CareMake up

There’s no denying that skincare is as popular as ever. Everywhere you look, you’ll find…
END_OF_DOCUMENT_TOKEN_TO_BE_REPLACED
3208
29
Share