Ignite The Runway Brings Down the House

“Ignite The Runway’ was presented in “salon noire” of Live Rocket Studios which featured two circular staircases which proved to be a magnificent backdrop for this innovative manipulation of Fashion, Music & Art & Tech. Each fashion designer & performer was introduced by their beautiful muse and Hostess of the evening (ala-Moulin Rouge), Consuelo Vanderbilt Costin (herself a Billboard Recording Artist) who dawned their creations as she introduced musical performances interspersed between each designer’s debuting of their micro-collections for SS23. 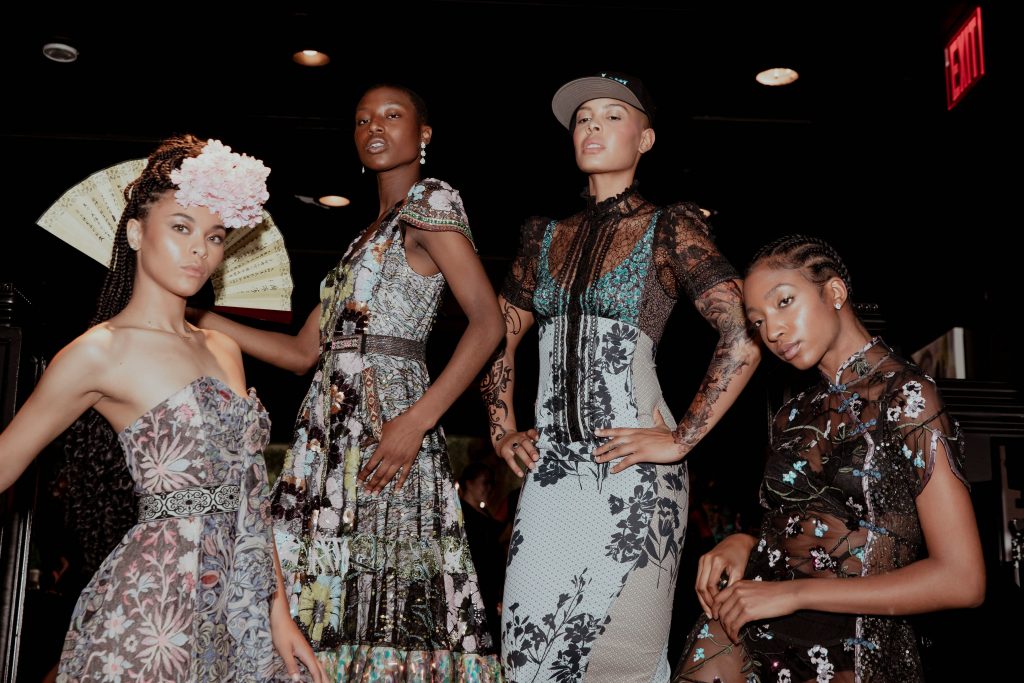 Ignite The Runway – In Earnest 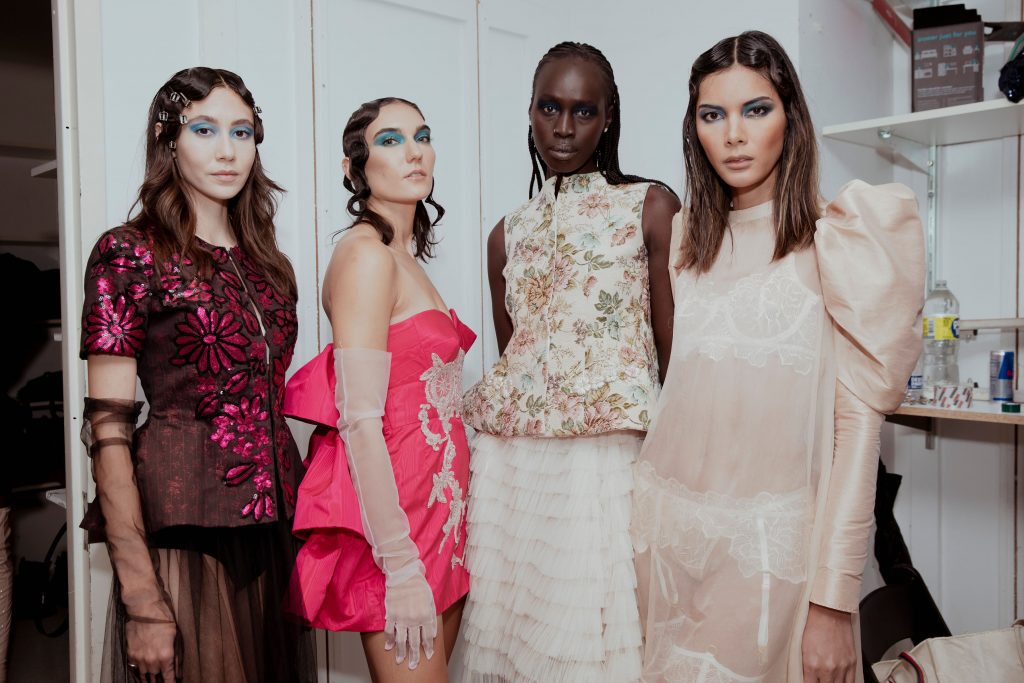 This unconventional manner of showcasing design collections emulated that of a cabaret or Broadway show rather than the traditional designer collective with a traditional runway. Guests marveled at the fashions, enjoyed the stellar performances from Tarralyn Ramsey-Pop-Gospel Singer, Sydney Palmier-Indie-Pop chanteuse, Mari Burelle, in addition to a special performance by the Joffrey Ballet School dancers who performed to songs by Lady Gaga.

On the 2nd floor, Sohomuse utilized the massive raw space to curate an art exhibition enlisting Israeli-born, nature-infusing artist, Rotem Reshef (Rotem exhibition curated by ArtStager) whose sprawling naturescape canvases gave the impression of being in a forest with compositions emulating fluid streams of consciousness which were actually painted with elements of flora which you could actually smell (gardenia). Juxtaposed against those were cutting-edge LED backlit cityscapes from artist Michael Victor, quirky illustrations from new artists, 18-year old Remy Rivers and model/artist Emma Deegan who also walked in runway shows.  Afterwards guests were encouraged to join the afterparty which included the sounds of DJ Griffin. 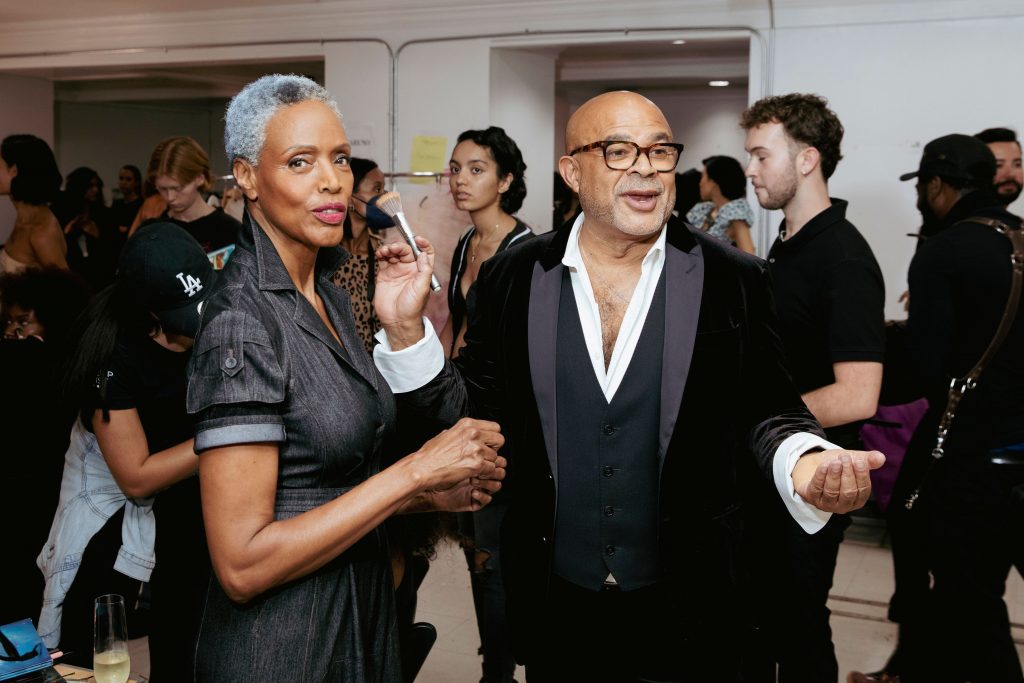 Sohomuse, since its inception, has taken the path less traveled by in supporting their global community of creatives and always serving up experiential evenings, online master glasses, topical symposiums which showcase their the multiple verticals of creativity and highlight topical issues of the day.

Additionally, a trailer for an upcoming documentary concerning the history of the Vanderbilt family’s interest in Fashion and how Consuelo is helping to connect the next generation of Creatives  will be released at the Sugar Loaf Film Festival 2022.

Consuelo Vanderbilt Costin is cofounder and president of the career networking site SohoMuse, a platform for creative professionals across the globe to network and collaborate across various creative industries. SohoMuse, launched in 2018, counts many of the world’s top creatives as members, including fashion designers Malan Breton and Nicole Miller, and New York Times fashion writer Ruth La Ferla. Costin is a seventh-generation descendent of railroad tycoon Cornelius Vanderbilt, a singer-songwriter, and a successful tech entrepreneur. As an artist and entrepreneur, she began her career as a singer-songwriter, landing her first record deal in the U.K. at the age of 21. In 2010, she founded her own record label, a venture that garnered her the title of Billboard Recording Artist with all singles landing in the top 10, with her latest single at top 5. Costin also released a jewelry collection inspired by the Vanderbilt family heirlooms on HSN. The Homage line paid tribute to her prestigious family history.

SohoMuse is the premier online community for creative professionals. It is a destination for creative professionals to represent themselves, connect with each other, find work opportunities, learn, teach, and develop their careers. SohoMuse focuses on the main sectors of the Global Creative Industry: architecture and related services; creative goods and products; entertainment and digital media; fashion and fine arts and performing arts. Among the career roles in SohoMuse’s target member base: writers; actors and performers; graphic and visual designers; illustrators; photographers; music supervisors; sound engineers; video/film and tv producers; creative directors and game designers. SohoMuse enables creatives to expand their networks and opportunities, source and hire top talent and collaborate with other creatives in one secure and trusted online environment, from anywhere around the globe. SohoMuse provides all the networking tools creatives need to promote projects, source talent, share and sell services; www.sohomuse.com.